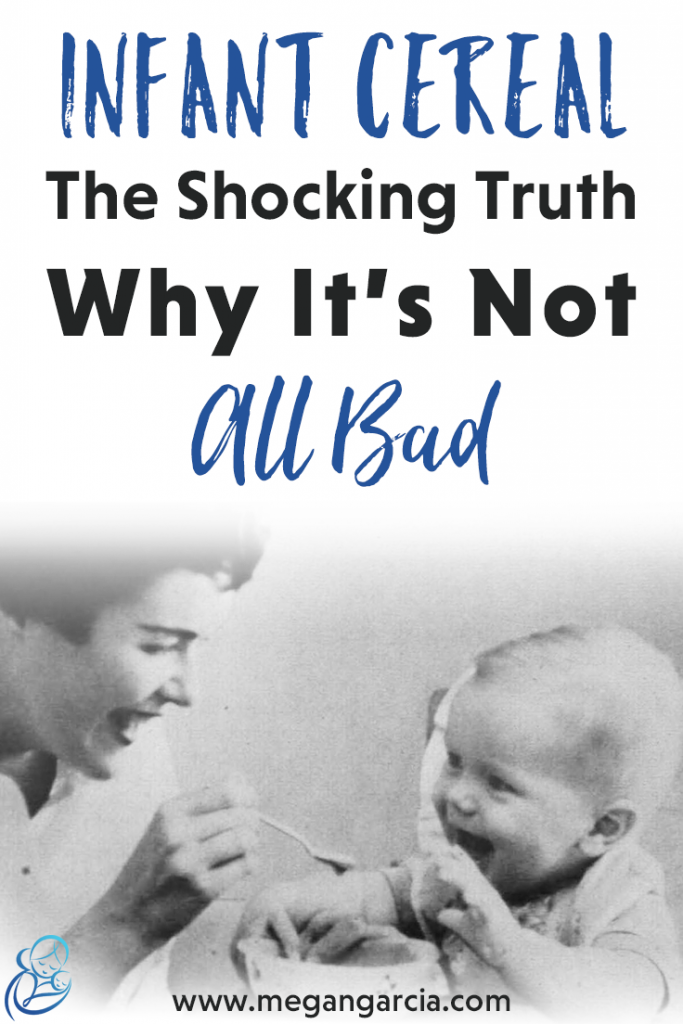 Many mamas avoid infant cereal because they’re told it wreaks havoc on baby’s digestive system and immune health. Well, here are the facts.

In a recent interview, I was asked:

What are your thoughts on the movement against feeding oatmeal and rice cereal to babies when they are initially embarking upon their first foods journey?

This question is good enough, that it’s worth turning into a whole blog post. I talk about cereal in my program First Foods & Beyond and I’ve mentioned it here and there through social media.

My response: I’m not against grains.

Infant cereal is an inexpensive way to fill your baby’s tummy – the processed version of gruel, if you will. It’s convenient. Easy. Fortified. And it’s what babies have been eating for generations.

With the move towards baby-led weaning, there’s less interest in boxed cereals that require a spoon and more interest in foods your baby can pick up. Unfortunately, this means there also a greater risk of deficiency of minerals that infant cereals are fortified with – namely iron and zinc.

If your baby’s only source of iron comes from infant cereal – it’s better than no iron at all.

Your Baby Can Digest Infant Cereals

Before diving deeper into iron, a word on digestion.

There’s this idea floating around that your baby cannot digest infant cereals. And this is because of an enzyme called amylase. According to some folks, babies do not make enough amylase to digest grains.

Amylase is a starch-busting enzyme. You need amylase to digest all starch – not only cereals. This includes bananas, potatoes, and other starchy root vegetables. Whatever isn’t digested gets carried into the large intestine, where it becomes fodder for healthy colonies of microbes.

A few more fun facts about your baby’s levels of starch-busting amylase:

While I get that grains are seen as a problem food by many, the idea that babies do not make enough amylase to digest infant cereal doesn’t fly with me – cuz as far I know, science says something different.

Still, infant cereal still isn’t amazing. Even if your baby can digest it. This is because it contains anti-nutrients that bind to minerals – which explains why all infant cereal must be fortified.

If you’re going to skip the infant cereals – I totally did – be sure to replace these cereals with other foods that are rich in iron and zinc.

A study published in May 2016 found that babies who eat according to the principles of baby-led weaning are *more likely* to be deficient in iron, zinc, and vitamin B12. As it turns out, problems pop up when parents ditch the infant cereal but stick with common first foods like:

First, I want to point out that except for egg yolk, these foods – like cereals – require amylase for digestion.

Second, all of these foods – including egg yolk – are a poor source of iron. This can be a problem, since babies need iron from food at 6 months…sometimes earlier. And if you’ve abolished grains from your home and breastfeed, chances are good your baby isn’t getting enough iron to support healthy brain development.

Which is where meat comes in.

Meat and organ meats are a wonderful source of iron. However, they’re not typical first-food fare. Offering your baby meat as a first food can be intimidating or feel weird – it’s just not the cultural norm.

But imagine your ancestors from thousands of years ago – a mama prechewing some rib meat from a bear, spitting it out, and offering it to her 5-month-old. Or a milk substitute of mashed fish eggs, seal oil, and lily bulb. There’s evidence that first foods were heavy in animal foods and meat…and minimal in plants.

That ancestral mama – get in touch with her.

Get comfortable with prechewing your baby’s food to make it more palatable. Maybe follow the principles of baby-led weaning. And embrace meat as a first food.

To make this a little easier, I put together a pate recipe that’s suitable for babies and easy enough to whip up in a blender.

Do you feel comfortable feeding your baby meat? I would love to hear in the comments below!