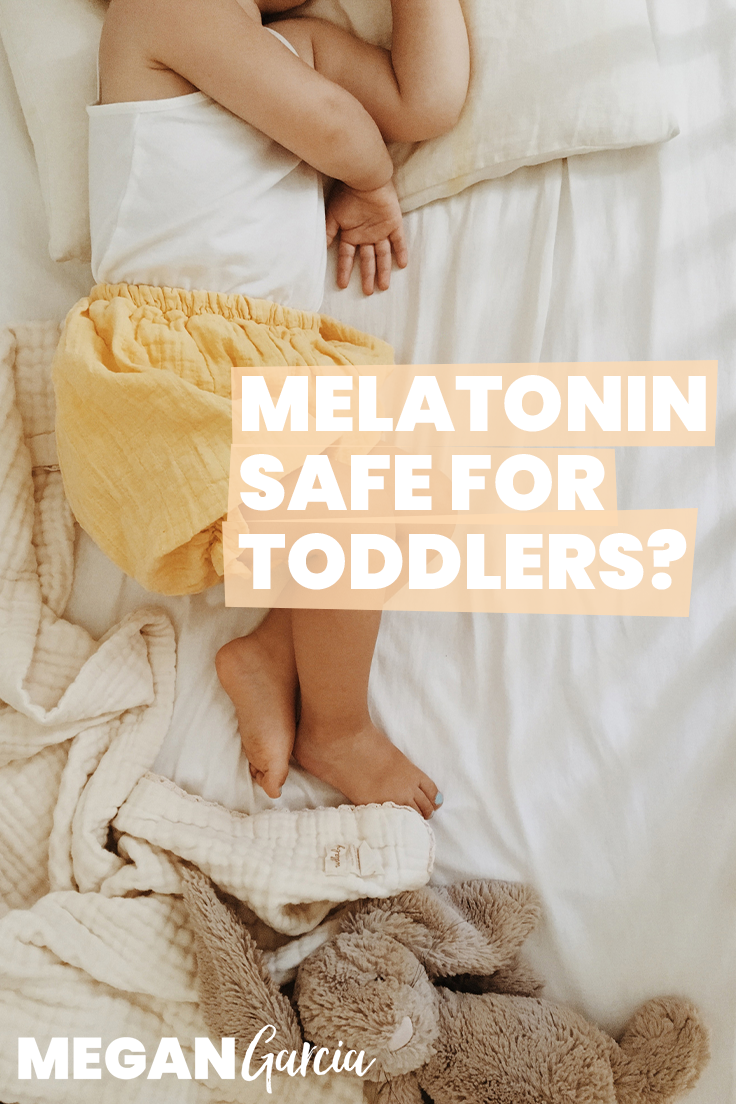 In response to sleepless nights or even unconsolable night terrors, you might wonder if melatonin for toddlers is safe. Your pediatrician may even recommend it.

But there’s a big difference between using melatonin to get through some jet lag and relying on it to help your little one sleep.

What’s more, you have better options.

Melatonin is a mighty hormone and it has a big responsibility. It takes its cues from the surrounding light and gets you to sleep.

Often called “the hormone of darkness,” light inhibits the body from making melatonin and secreting it. Which means levels naturally shift with the seasons. It also means that synthetic light from lightbulbs or screens can interfere with natural melatonin levels.

Besides making you sleepy, melatonin also acts as an antioxidant, anti-inflammatory, and free radical scavenger.

What’s more, you can find melatonin receptors throughout the body. There’s even evidence that every healthy cell makes melatonin. This helps to explain the broad reach that melatonin has, affecting systems like:

Melatonin production relies on tryptophan. Because tryptophan is an essential amino, supply in the body is limited. So diet matters.

Good sources of tryptophan include:

The problem with over-the-counter melatonin for toddlers

In the United States, you don’t need a prescription for melatonin. But outside the US, many countries ban over-the-counter melatonin, including:

And it looks like there are a couple of good reasons for this.

For starters, there are strength and purity issues. Melatonin levels in an over-the-counter supplement may not actually reflect what’s on the label.

In 2017 researchers at the University of Guelph in Guelph, Ontario, Canada looked at 31 different melatonin supplements. Surprisingly, the melatonin levels in these supplements were anywhere less than 83% to over 478% of what was claimed on the label.

Chewable melatonin is most likely to be offered to small humans. These contained almost 9 mg of melatonin per dose. Whereas the label claimed one dose had only 1.5 mg. And levels of melatonin varied widely between lots of the same brand.

On top of this, 8 of the 30 melatonin supplements tested also contained serotonin that wasn’t on the label.

And while you can find natural serotonin in herbs like chamomile, some of the melatonin supplements tested didn’t have added herbs. But they still showed significant levels of serotonin.

In short, there’s a good chance that the label of your melatonin supplement may not reflect what you’re actually getting.

The other very good reason to exercise caution when using melatonin – especially in little ones – is that it may impact the onset of puberty.

Melatonin is part of the body’s daily and seasonal internal clock. But the body also moves through a rhythm as it ages. From those first weeks as a newborn and into adulthood, melatonin levels naturally shift.

There’s some evidence that the drop in night time melatonin parallels sexual maturation. So what happens when the body continually receives an outside source of melatonin?

Well, all we can do is speculate.

Here’s what we know now:

Since the 1960’s melatonin was known as an “anti-gonadal” hormone. Even small doses of melatonin could reduce fertility and the size of reproductive organs in rats, mice, hamsters, and primates.

And it looks like melatonin may suppress gonadotropin-releasing hormone. However, this may only be an issue when melatonin is used for long stretches of time.

Unfortunately, there are a lot more questions than answers. But for me, the questions raise some really important concerns.

And with that, cue my top three ways to support baby sleep that don’t involve melatonin:

Sleep hygiene equates to the steps you take to get a good night’s rest.

These steps are basic. And they’re the “low hanging fruit” that you want to tackle first before considering melatonin or other natural sleep aid for kids.

Below, a few sleep hygiene tips for the whole family:

There’s some interesting evidence suggesting that melatonin levels begin to rise in 3-year-olds at around 7:40 pm.

Also known as “dim light melatonin onset,” this isn’t when your kiddo needs to be put to bed.

On the contrary, if bedtime is too close to melatonin onset, chances are you’re going to have more trouble with sleep. This might look like calling out to parents, asking for another drink of water, tantrums, or refusal to sleep.

As long as you’re checking all the boxes of good sleep hygiene, a slightly later bedtime can work to your advantage.

And if your toddler is still struggling to fall asleep, you may also want to consider getting rid of naps.

It may seem counter-intuitive, but play – even rough, physical play – can release tension and wound-up emotions that have accumulated throughout the day. Especially if your little one didn’t have a chance to spend plenty of time outdoors.

Known as “play listening” in the Hand-in-Hand parenting framework, this type of play before bedtime can also reinforce the connection you share with your little one.

It’s worth noting that you would want to incorporate other tools, like “stay listening” and firm, compassionate boundaries to help build sleep confidence.

When I think about natural sleep aid for kids, my mind goes straight to traditional Chinese medicine (TCM). It’s what I’m trained in. And it’s what I understand.

Here’s what you need to know: TCM looks at the whole body. So what works depends exclusively on your little.

That means no cookie-cutter solution.

But if your approach to sleep hygiene and sleep confidence is solid, then there are a few big directions you could go from a TCM perspective. And to figure out what’s best for your child, you would want to work with an acupuncturist who might look at:

What’s interesting is that whether we’re talking about traditional Chinese medicine or current research in the medical field, there’s a HUGE relationship between sleep, behavior, digestion, and immune balance.

This means that it’s possible to address a constellation of problems by simply working with how poor sleep presents itself in the TCM framework. But it requires fine tuning.

With that said, there are two broad pediatric sleep formulas that are both easy to get and based on TCM botanicals:

BioRay Kids Sleepy: Similar to a traditional formula called Suan Zao Ren Tang, that’s well known for its ability to address insomnia. The star herb in this formula and for insomnia is “suan zao ren” or jujube seed, which on its own is known for its calming effects. Jujube seed contains jujubosides, which surprisingly has different effects on daytime versus nighttime sleep.

Gryph + IvyRose Call It A Night: While we see jujube seed and silk tree flower and bark – all TCM “spirit calming” herbs – this formula has more herbs that are cooling and that address overwhelming, congested emotions. I might use this formula for sleep support if eczema, rashes, or constipation are also an issue.

FAQ: Are TCM sleep herbs okay for long term use?

In short, if you’re using the same formula for a long period of time, it’s a good idea to stop all herbs after eight weeks in order to avoid formula fatigue.

What’s more, the point of TCM botanicals is to reestablish balance.

So you want to check in with the body and see where things are at as seasons change (yes, summertime heat can affect sleep) and as your child’s body changes.

Often, you will find the herbs are no longer necessary!

Or, if the sleep issue is constitutional, the same problem may pop up from time to time. In which case, it may be time to revisit herbs.

In all cases, the most accurate approach will be with the help of your acupuncturist.

Before considering melatonin for toddlers

Poor toddler or baby sleep can be part of a network of problems that are best addressed by caring for the whole body. What’s more, from a TCM perspective, continually disrupted sleep can create its own issues later on.

So you really want to nourish the root.

This means preventative medicine. And it means going a step beyond patching up sleep troubles and addressing the deeper issue.

Your kiddo’s sleep issues may be 100% about sleep hygiene. Or, there may be something else going on.

Bottom line: If your little one’s disrupted sleep patterns are getting in the way of a good night’s rest, go ahead and explore solutions beyond melatonin.

And make an acupuncturist friend or two. It’s good medicine 😉

Has kids melatonin helped your family? Let me know in the comments!